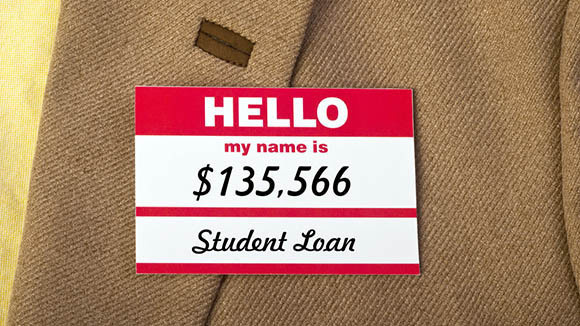 We naturally think that it’s Millennials who are struggling with student loan payments. Turns out, many of their boomer

In fact, according to a report from the federal Consumer Financial Protection Bureau (CFPB), older Americans now

more student loans quadrupled from about 700,000 to 2.8 million; the share of all student loan borrowers that age more

We are concerned that student loans are contributing to financial insecurity for many older Americans.

“It is alarming that older Americans [age 60+] are the fastest growing segment of student loan borrowers,” said CFPB

director Richard Cordray. “We are concerned that student loans are contributing to financial insecurity for many older

A Tale of Two Crises

A growing number of the older borrowers are struggling to make the loan payments, often due to reduced incomes in

retirement or just before retiring. “Older consumers with outstanding student loans are more likely than those without

medicines, doctors’ visits and dental care because they could not afford it,” the CFPB report said.

According to the report, in 2015, 37 percent of federal student loan borrowers age 65 and older were in default (only 17

percent of federal student loan borrowers age 49 and under were). And the proportion of delinquent student loan debt

No Way to Treat a Borrower

But it’s not just the amount of student loan debt that’s making life rough for many older Americans. It’s the way the

borrowers are often treated — or rather, mistreated — by loan servicers and debt collectors.

collectors that exacerbate their financial distress,” the report said. Consumers 62 and older have submitted to the

The Big Surprise About Their Loans

If you think all this student loan debt is a holdover from the boomers’ college years, think again.

Loan program (current rate: 6.31 percent), the only federal program that lets parents borrow for the undergraduate

education of their kids.

The parents either took out student loans directly or as co-signers with their kids as the primary borrowers. Private

student loan lenders, the CFPB noted, routinely require a student jointly apply for a loan with a co-signer.

And, as personal finance expert Nick Clements pointed out on Next Avenue, being a co-signer can be a risky

proposition. If your child misses a payment, your credit could take a hit. According to the Federal Trade Commission,

Clements said, three out of four co-signers end up having to pay something on co-signed loans because the primary

A few tips for older student loan borrowers in distress or worried they may be soon:

If you’ve co-signed your child or grandchild’s student loan, you can ask the servicer to see account information so you

can pay off the loan or learn the outstanding balance, says the CFPB.

If you’re struggling with making federal student loan payments, the CFPB says, see if you can qualify for a payment

plan that could cut your costs. For instance, if you retire and your income drops substantially and have a federal

student loan, you can apply for an income-driven repayment plan. That could reduce your payments or possibly

suspend them. The Department of Education’s Federal Student Aid website https://studentaid.ed.gov/sa/ has more

details. And the CFPB’s Repay Student Debt tool on its site has useful information about repayment options.

And if you’re being harassed by a student loan debt collector or servicer, file a complaint with the CFPB online. The

agency can then contact the company on your behalf.

The CFPB, which has handled more than half a million cases during its six year existence, has an impressive history

of getting results. A few months back, the agency forced Wells Fargo to pay $100 million because the bank set up

millions of fraudulent accounts. The CFPB has also returned $11.7 billion to more than 27 million consumers from

other companies. And its complaint database has processed more than 1 million complaints.

The CFPB’s future, however, is cloudy. Some financial analysts expect the Trump Administration to try to either \

dismantle it or make its teeth less sharp.

"Associate yourself with men of good quality if you esteem your own reputation for 'tis better to be alone than in bad company."